History of the Castello di Piai

The Piai’s Castle had the period of greatest splendor under the Lordship of the Da Camino in century XIII-XV : confirms it a safe in solid wood, covered by sheets of iron with orthogonal mesh secured to support with nails rivets, belonged until 1423 at the last Castellano Salatino Scotti and now guarded in the archpriest church of Fregona (a strongbox same to this also for the complex safety mechanism housed on the top cover, but of smaller dimensions, is located in the castle of Gorizia).

Situated on the namesake hill in the panoramic view at the foot of Monte Pizzoc, extreme western offshoot of the massif of Cansiglio-Cavallo, it has Roman origins as control station, along the valleys of the rivers Carron and Friga, tributaries of the Meschio, connected with the road that climbed up toward the plateau of Cansiglio and of Alpago, in connection, also visual, with the strongholds of Serravalle and Ceneda at west, and with the fortified settlement late-ancient of King Matruch at south, in the locality of Nastego at the Fratte and to east with those of the hill of San Daniele, above Osigo, and Montaner in municipality of Sarmede. 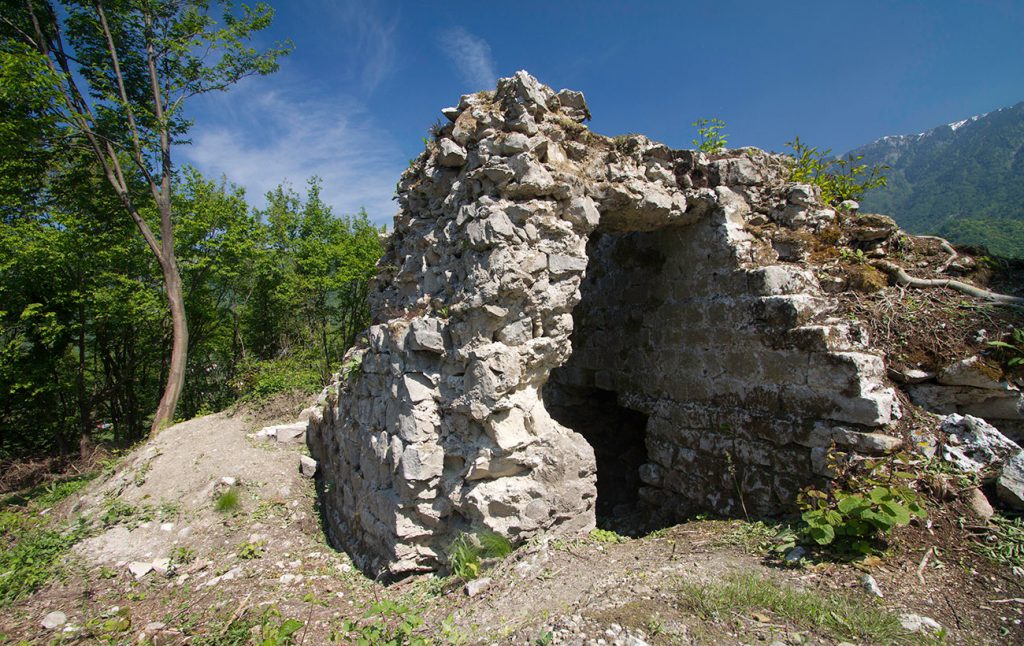 The investitures of the Da Camino and the Castle 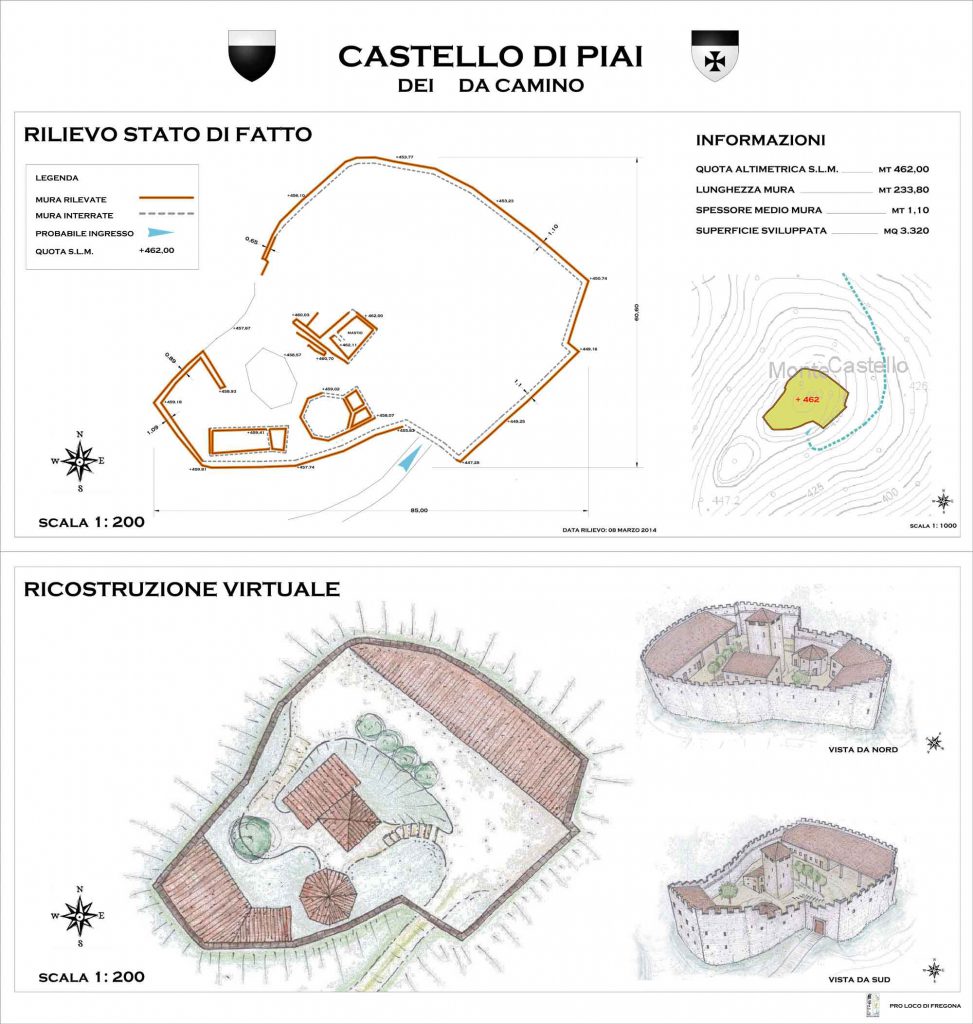 The date of the destruction is not known, perhaps the Da Camino’s castle of Piai was ramshackled by the Hungarians of Pippo Spano who from 1411 had invaded the Cenedese territory, knocking down most of the fortresses, or perhaps it was abandoned just before, with the decline of the Da Camino to the end of the fourteenth century, the last citations found in the documents refer to 1383 during the war with the Carraresi.

From that moment the castle follows the turbulent events of the family. On 10 February 1242 Biaquino and Guecello Da Camino they are declared decayed by all the fiefs of the Cenedese territory before assigned to them by verdict of the Peers of the General Curia of Ceneda, they having assaulted Porto Buffolè and killed the Episcopal vicar; is cited the “castrumFregone”. In 1246 the castle of Fregona passes temporarily by Tolberto da Camino at Ezzelino da Romano, with which Tolberto had ally. Ezzelino da Romano was in fact from these parts with warlike intentions: “Being Lord Ezzelino da Romano with his army around Ponte di Piave, and with him Lord Tolberto …”, “almost spontaneous voluntate..”, almost(!!) spontaneously, will entrusted to him the custody of his castles. The castle soon however is again of the Da Camino; 18 May 1261 Biaquino and Tolberto they conclude agreements for the division of property and Biaquino gets, inter alia, Fregona: “CastrumFregonumcum Fregona “.

Of the castle is talked again, 14 September 1296 in the episode of the abduction by the Fregonesi in “montibusfaedi” in the locality Cercenedo, competence of Gastaldia of Caneva, of the merchants who passed with their load, “cumaliquibuissomis”, on the road of the Patriarch – the merchants seized are locked up in the Castle of Fregona “ad castrumFregoneconduxerunt”.
In the first years of 1300 the Da Camino are allied with the Scaligeri, in 1315 there is a double marriage willed by Guecellone: Rizzardo (VI Novello) with Verde della Scala granddaughter of Cangrande, Aica (Gaia) with Franceschino son of Bartholomew I. This policy makes Treviso (of faith Guelfa) an enemy, and Guecellone is forced to retreat to Feltre, however in 1319 on 27 December, Guecellone asks for and obtained, with an act of homage to the bishop of Ceneda Manfredo of Collalto, the investiture of Zumelle, Valmareno, Serravalle, Fregona, Cordignano, … 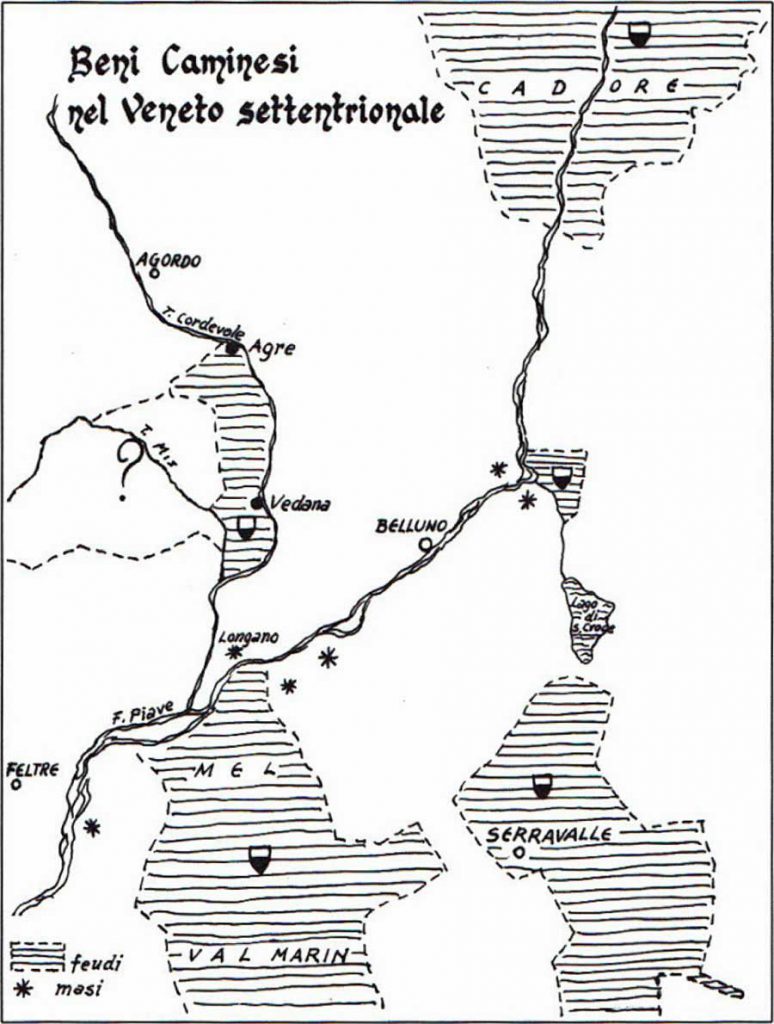 In 1320 Guecellone concludes an agreement with Treviso, but the Della Scala they feel betrayed by this quick change of opinion and it opens a period of struggles with Cangrande della Scala, also because the Cangrande’ aims to possession of Belluno and Cadore, and following these contrasts, Guecellone makes the son Rizzardo to repudiate his own wife, Verde della Scala, and on 22 March 1322 he stipulates a marriage contract between Rizzardo and Anna, daughter of Otto II duke of Carinthia; the stipulation takes place publicly to “plebem in platea comunis” in Fregona.
On the way back from Verona, in July 1322, where he had gone for the peace negotiations with Cangrande, Guecellone is caught in a betrayal by order of the vicar of Padua (and probably of Cangrande) and kept in prison in Cittadella for eight months, but in the same year (1 August 1322) the bishop of Ceneda renews him the Investitures, among others, of the castle of Fregona.

The Castle of Fregona is mentioned again in the document with which in 1323 on 13 September the bishop of Ceneda, excommunicate Guacello and his son Rizzardo; excommunication that arrived from Pope John XXII that, according to the testament of Rizzardo brother of Guecellone , is expecting to receive some legacies, and getting not them, he send two of its responsible to “seize” the possessions of Da Camino.

In November of 1324 Cangrande occupies Cavolano, Serravalle, Formeniga and Fregona: Guecellone dies in the meanwhile, and Rizzardo VI Novello (Guacellone’s son) resumes his wife Verde della Scala, and his fiefs occupied by the uncle of his wife. In 1335 dies Rizzardo VI last of Da Camino di Sopra for wounds in battle in the meadows of Camolli at Sacile, and his wife Verde della Scala, pregnant, takes the tutelage of hers two daughters and of the unborn child: Verde however gives birth to another female and so the branch of the Da Camino di Sopra become extinct, with the danger that being Verde the sister of Alberto and Mastino della Scala, the Veronesi shall advance rights on inheritance. The Da Camino di Sotto go forward with their hereditary rights but also the bishop of Ceneda Ramponi thinks to take the fiefs because the investiture of the Da Camino comes, at least according to him, by the bishop of Ceneda.

So, on 12 October 1337, the Bishop assigns to three procurators of San Marco, Marco Morosini, Marco Giustiniani and Giustiniano Giustiniani of a certain number of fiefs ex da Camino, including Fregona and its castle; he sets aside half of incomes in exchange. The Da Camino Rizzardo IV and Gherardo not very satisfied with this move react in three ways: they get the investiture of the assets in question by the Bishop of Belluno Gorzia de Lusia and by the Patriarch of Aquileia (3 March 1339), they launch a lawsuit that they’ll win, and they planning up a conspiracy against the bishop with the support of the Patriarch of Aquileia. Regarding the conspiracy against the bishop, on 14 January 1340 Peter from San Lorenzo, employee of the bishop of Ceneda, denounces the conspiracy and shows a letter as a proof.

Fregona is at the center of the drama, a conspirator in fact says “will participate people favorable to Da Camino … from Fregona … ” and the conspirators meet at Fregona: “Between three days we go thou and I in Fregona to speak with your friend Ser Mino, …”. A subsequent document shows a questioning of the conspirators (16 February 1340) in which names are made: Joannes de Fregona, defined, together with a certain Guerzulus, “familiars domains Rizzardi de Camino” (familiars stands for servants with important roles or small vassals n.d.r.) and it is said that their “base” was Fregona from which they were travelling to Ceneda “came to Ceneda and returned to Fregona” to discuss the killing of the Bishop and the destruction of the castle of San Martino of Ceneda. The conspiracy forces the Bishop to take refuge in Venice for safety, and the dispute closes in 1343 when the procurators of San Marco, to avoid further riots, renounce to the investiture and the castle gets back in the hands of the Da Camino. 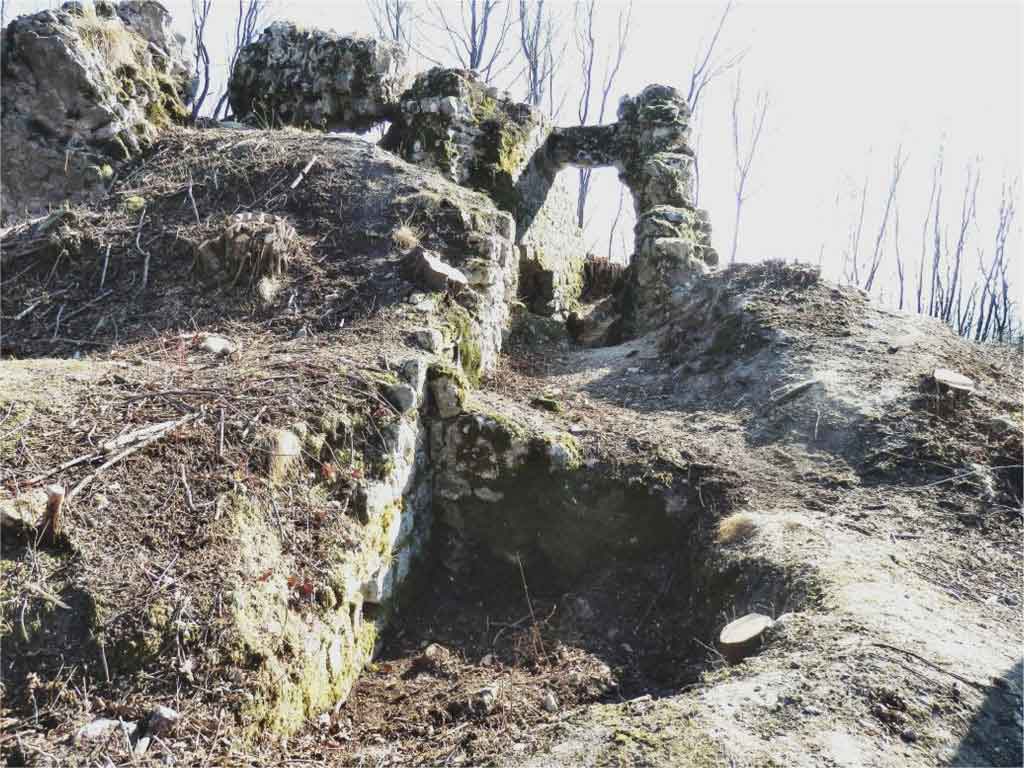 “The castle is involved in 1356 in the war between Lodovico King of Hungary and the Republic of Venice with the local nobles allied now with the one now with the other: “… Fregona and other castles in the territory of Treviso, surrendered to Hungarians weapons or spontaneously, or taken by assault”. Later in 1372 during the war between the Venetians on the one hand, the Carraresi and King of Hungary on the other, Fregona is mentioned in a letter of Doge Andrea Contarini in which they ask for reinforcements “will provide without delay to enlist infantry, mercenaries possibly or vassals trust Fregona and Solighetto”.

In 1383 the castle of Fregona is again involved in the war between Venice, Francesco da Carrara and Leopold III Duke of Austria. Wounded and prisoner Guecellone IX that fought with the Venetians, Fregona and the other strongholds of the territory surrendered with little resistance. 15 October 1383 “the lord of Padua, after the capture of the castle of Cordignano of Lord Guecello da Camino, occupied and owns … the Castle of Fregona ..of the said Gherardo (brother of Guecello n.d.r.)”.

Is presumed that Guaccellone is dead in Portobuffolè in 1390, the brother Gherardo VII, attracting the hate of Francesco I from Carrara, lost the castles of Cordignano, Motta and Fregona and remained prisoner in Padua for some years: released at the end of 1390 he went with the son Ercole to Jacopo da Porcia and died the year after. With these two brothers concludes practically the history of Da Camino, even if secondary branches and heirs are survived without any more influence political and military.”

Here stops the history of the castle, of which is uncertain date of destruction: the Verci in his chronicle of the war that from 1411 opposes Venice to Sigismund of Hungary, and that spreads destruction up to Marostica and Bassano, doesn’t mention Fregona, while recalling, for example, Cordignano and Valmareno. This could also not be significant and the castle was destroyed in those circumstances, as rather mean that the castle, past according to tradition at Salatino Scotti (“King Salatin”) which certainly was not a warrior, having already lost every military function and perhaps damaged in 1383, had been abandoned or intended for other uses. 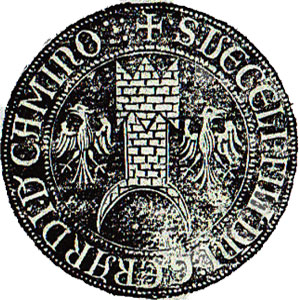 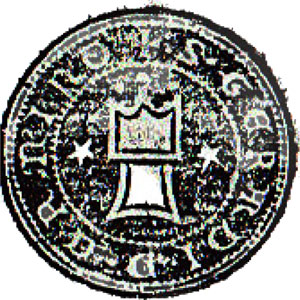 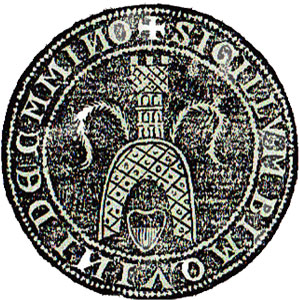 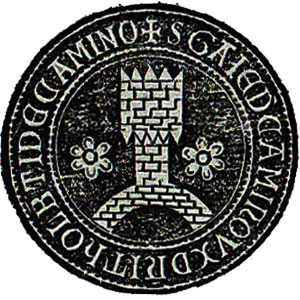 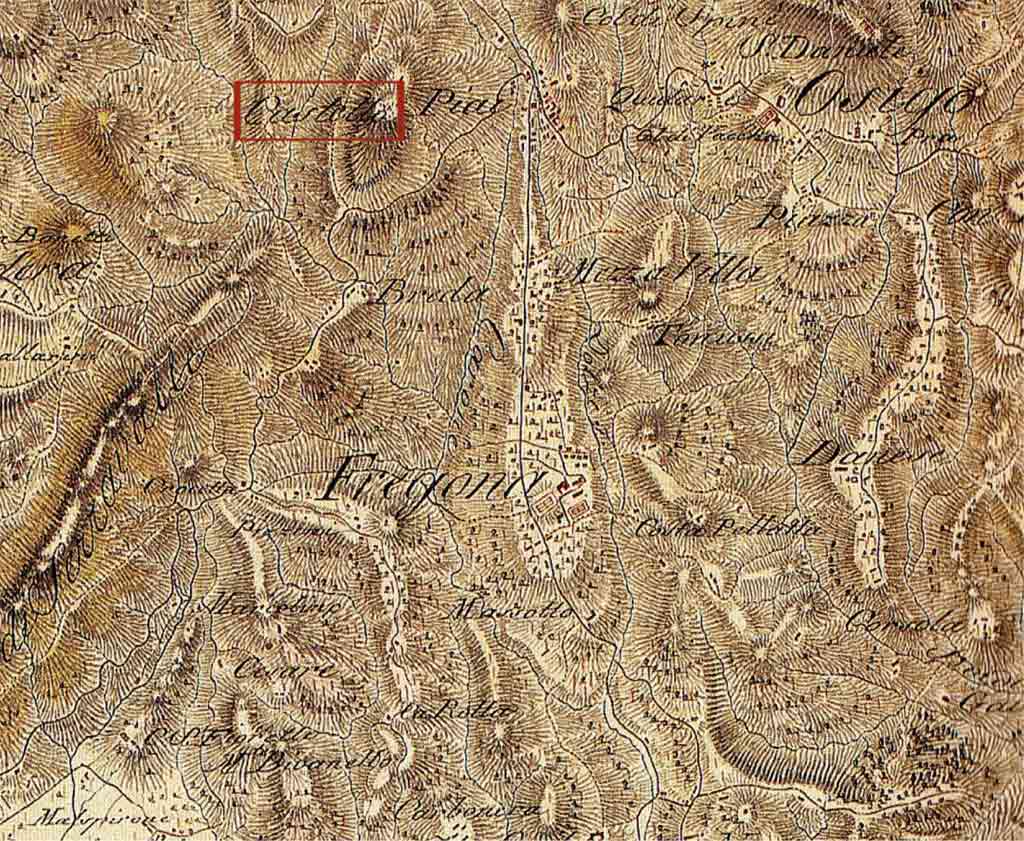 Austrian Kriegskarte (1797-1805) with the castle and a trail of access from Mezzavilla which now no longer exists. 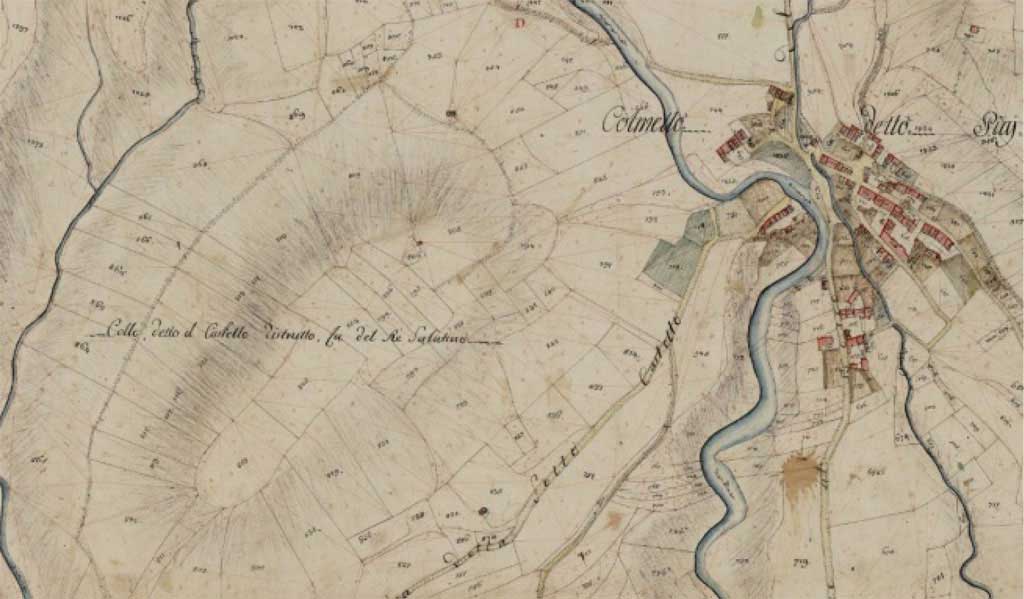