The Bell Tower of Fregona

The idea of boulding the Bell Tower

The preparations for the construction of the current great bell tower can be traced back to the winter of 1869-1870. At the incitement of the archpriest Don Antonio Dalla Rosa, the necessary material began to be found. Later, however, when difficulties arose, the work was abandoned and the material already accumulated was used for other uses, and partly stolen by night.
From the year 1880 the idea of building the bell tower seemed to proceed safely, without a hitch. 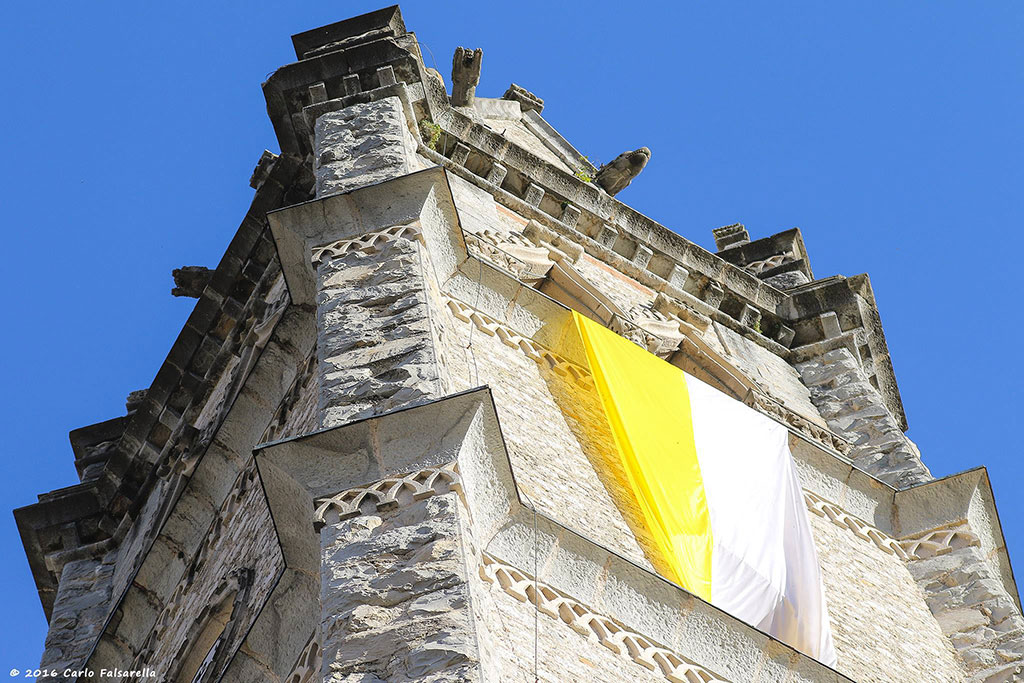 Thanks to the spirit of enterprise of the archpriest Don Andrea Tomé, who had already shown particular resourcefulness by repairing the archpriest church and the rectory severely damaged by the earthquake of June 29, 1873, he proved to be decisive for the construction of the bell tower. In fact, not only from the pulpit he did a constant and welcoming work of convincing. In order to facilitate the transport of the heavy boulders from the Masaré, he even devised a special type of cart, called a “car mat”, with two wheels without sides, pulled by oxen, but also by hand.

On February 6, 1881, Don Andrea proceeded to let the population nominate a special commission, chaired by himself, which immediately got to work starting the excavation of the foundations until the 15th of the same month.

The whole population of the parish, without distinction, on the basis of pre-established shifts between the eight hamlets, worked tirelessly and with great enthusiasm, some digging the foundation well 20 meters deep, with a square base of 12 meters per side, some removing with the panniers the large quantity of land extracted (840 cubic meters) and arranging it all around the church, levelling the large square above the road.

The works took place mainly during holidays, but also during weekdays; moreover, it is noted that the hamlet of Sonego on several occasions sent the people who worked there, batches of bread.

On 21 December 1881, after more than ten months from the beginning of the excavation, everything was ready for the solemn ceremony of laying the first stone of the foundations. At two in the afternoon, the Registrar of Bishop Cavriani went down to the foundation pit to place the blessed stone containing a parchment and coins in a spot with crystal clear water.

It took three years to complete the masonry of the foundations, which was shaped like a quadrilateral having the sides with four meters thickness and keeping the internal wall circular, like a well, a system that will be kept the same up to the top.

The design chosen for the execution of the bell tower was made by the sculptor and designer native of Fregona Francesco Ciprian, who said to have conceived when he was an emigrant to Austria, inspired by the Votive Church of Vienna [the resemblance is instead found in the towers of the Rathaus of Vienna (ed)].

Determined to leave a monument to his land that testified his skill and love over the centuries, he set about the work with trepidation, not only taking care of the design to the smallest details, but also personally supervising its execution moment by moment. The difficulties were many and of every kind, but what bothered him most were the constant interference from some of his villagers, whose presumption was so much unbearable that one day he withdrew his drawings, determined not to collaborate. Lucky for us, he later returned to his decisions otherwise today we would not be able to admire the work completed with all the decorations that made it famous, with the elegant belfry, the daring spiers and, in part, those singular “acquaroi » of the summit, fantastic evocations of dragons and lions’ heads, gorgeous sculptures that also came from his hands as an expert stone carver.

Francesco Ciprian was born in Osigo on the 2nd June 1840, later he moved to Vittorio Veneto, where he died on 7 December 1918.

His drawings for the planning of the bell tower were lost during the bombing of Treviso, where his granddaughter lived and who owned them. 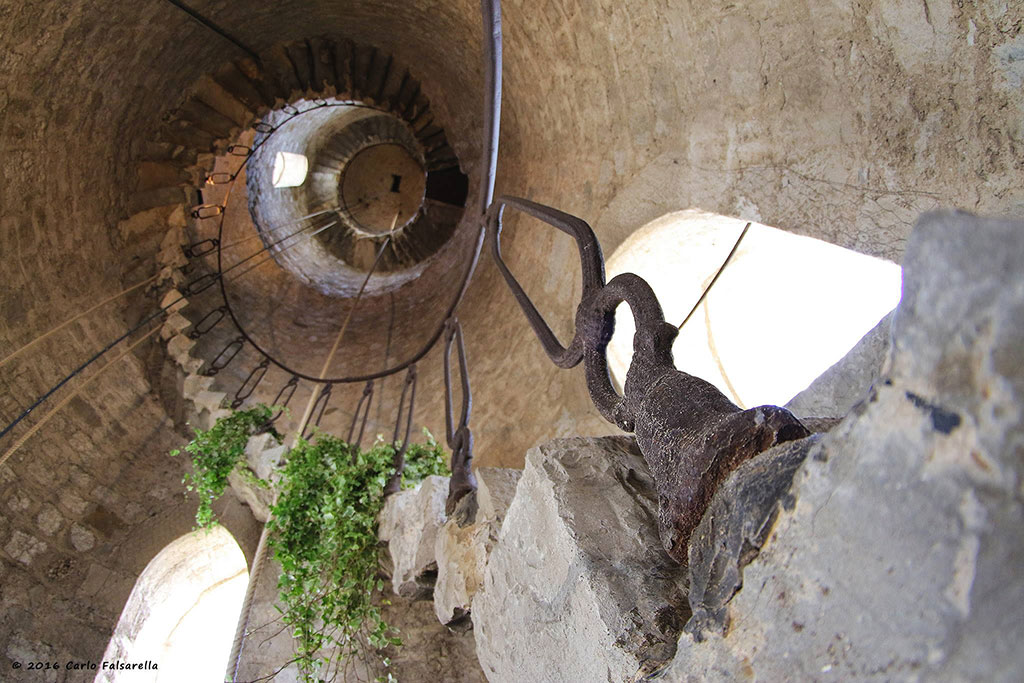 On 6 April 1885, the secretary of Bishop Cavriani blessed a second stone, which was placed on the foundations, that now reaches the height of the square, in the corner overlooking the church, where the foundation wall is deeper because it rests on a less secure ground.

From this moment began the second phase of the works, that will bring the bell tower to the height of the first large windows, abruptly interrupted in 1891 due to the sudden departure from Fregona of the archpriest Don Andrea Tomé, tireless animator of the work.

In November 1891 Don Angelo Ferro was elected archpriest, and he realised that the work for the construction of the bell tower, not yet halfway through, needed a new impulse, immediately proceeded to appoint a new commission, chaired by Candido Azzalini, whose work proved to be decisive for the completion of this prestigious monument.

On several occasions, whenever the president of the commission asked him, he urgently invited the population to contribute, with the means at their disposal, to the realization of the work, not forgetting that everyone had “a much more important job to attend to in the countryside “.

In the hope of completing the belfry by the end of the year, on 26 June 1897 Candido Azzalini, again in the name of the Commission, asks the archpriest to say a word of encouragement in the church for those who have not yet paid “the promise instalment for the bell tower, now that people are about to collect money for the sale of cocoons or for the first batches of cheese”, even threatening to publish the name, continuing the deficit situation.

On the verge of the new century, “between shocks and jolts”, with more or less substantial cash contributions from public and private entities, “the Factory of the Bell Tower”, which had already completed “such a beautiful and well-advanced work”, was now ready for the final leap.

On 12 January 1907 the “Factory of the Bell Tower” saw its most tireless and convinced promoter, Candido Azzalini, fail at the age of 57.

The bell tower remained, and still is, missing its spire; it is said that it must have been 12 meters high, starting from the base of those fascinating eight spiers, ending with the characteristic “fiorone”, which recall «in mystical number the eight Beatitudes of the Gospel according to St. Matthew, the highest perfection of virtue and reason of our hope». Therefore, the most representative work of Fregona remained unfinished, but certainly not for lack of generosity of his population.

It would not make sense to talk about a bell tower without remembering its bells. Perhaps to someone today, obsessed with our society of noises, their ringing can bother, but we must not forget that in the past they have set the rhythm of our days and, by playing flat, hammer or even dead, they marked the stages more important than everyone’s life.

In truth, the “terzi” and the “allegrezze”, especially those played by the young people of Breda, were famous throughout the area, enough to inspire one of the most famous and poetic pages of the novel “The strongest”, by the Victorian writer Emilio Zanette.

Starting from Easter 1961, the bells had to be electrified; In fact, the then archpriest Don Raffaele Lot wrote: “We are proud to have (after the Cathedral) the largest bell in the diocese, and we do not have the satisfaction of hearing bells sound like we used to, because there is not strength”. 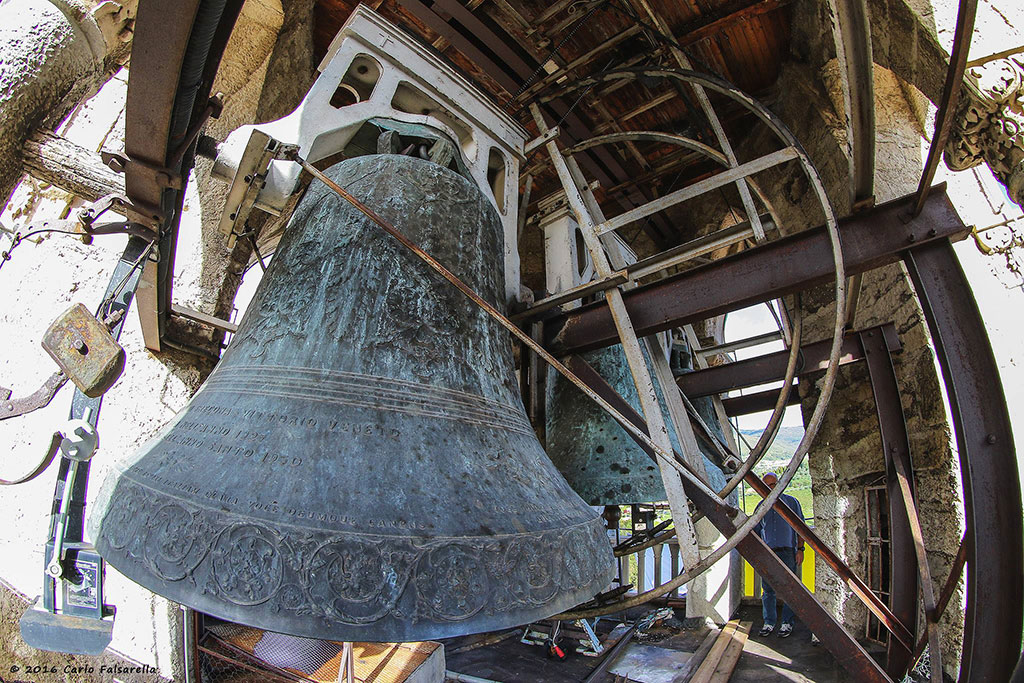 However, there are some elderly people who still regret the “triple concert”, regular and poetic of the past, when it was guided by skilled hands and careful ears, and it spread gently in the valleys “like old voices arousing a religious commotion in the farmhouses far away”.

The vicissitudes that occurred to the three large bells, two of which casted in 1907, fell from the top of the bell tower and then removed by the invading Austrians on 4 June 4 1918, are known to us for having been told by Mons. Toja in one of his manuscripts, in which is also noted that “the invading barbarians” tampered with the clock of the bell tower, the one before the current one, with Roman numerals.

On 23 March 1920, amid enthusiasm and general emotion, the three new bells cast a little time before by the De Poli company in Vittorio Veneto were transported to Fregona on sturdy wagons drawn by oxen.
The largest of these, which weighed 2220 kg, broke on February 8, 1927. The three new bells arrived from Bassano on 29 October 1927; on the same day the three old ones set off to the same locality. After only a few months, the two minors broke the handles that kept them suspended from the stumps. The new bells were consecrated by Bishop Beccegato on 8 June 1928.

The earthquake of 18 October 1936, although less intense and less catastrophic than that of 29 June 1873, also caused serious damage to the town of Fregona. The prohibition imposed by the parish priest to the owners of the rides to settle, as usual, at the foot and around the bell tower on the occasion of the traditional festival of the third of October proved to be providential, because the violent and prolonged jolts and tremors that occurred on the morning of the festival at 4.10′.22”, brought down all four pinnacles on the sides of the bell tower.

Also, the recent earthquake of 6 May 1976, which hit the northern part of Friuli with particular violence, caused a fall of tip of these pinnacles, which fell to the ground, dragging with it the electrical transmission system of the bells, as well as a balustrade by the length of 10 meters. The repair work was promptly carried out by the archpriest Don Raffaele Lot, who had previously built the new concrete balustrade of the belfry, supplying it with new cast-iron blocks to support the bells and renovating the system of the lightning rod.