The Grotte del Caglieron are located in locality of Breda in Fregona, in the province of Treviso.

The complex consists of a series of cavities, part of which are of artificial origin and part of natural origin; for the natural part, it is about a deep gorge carved by the Caglieron stream on alternating layers of calcareous conglomerate, sandstone and marl of the Middle Miocene (from 16 to 10 million years ago).

There are numerous waterfalls, of several meters high, with large potholes at the base.
In the deepest part of the gorge, large calcareous concretions can be noticed on the wall, which close for a stretch and in part the vault, giving to the whole complex the appearance of a cave.
On the walls of the gorge there are large artificial cavities, obtained from the extraction of sandstone, the typical “piera dolza” (soft stone). 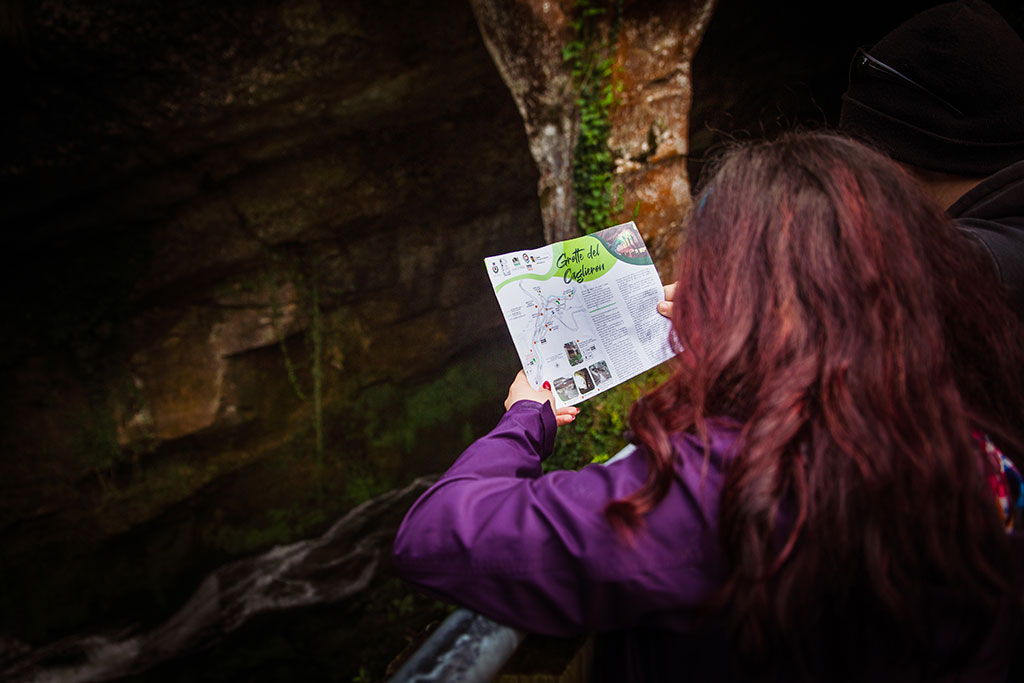 The extraction activity, which dates back to 1500 and perhaps even earlier, provided the material for the construction of jambs, architraves, etc., which can still be observed on the old houses and palaces of Vittorio Veneto and its surroundings.
The extraction method practiced is of great interest: being the layers inclined even more than 45 °, the detachment of the material, caused by using large chisels that have left visible signs, occurred in blocks, with the warning, however, to leave the columns inclined to support the vault.
The result is an evocative set of artificial cavities, distributed along the ravine, on the bottom of which the torrent flows whirling and noisy, so as to bring to the construction of an equipped path. 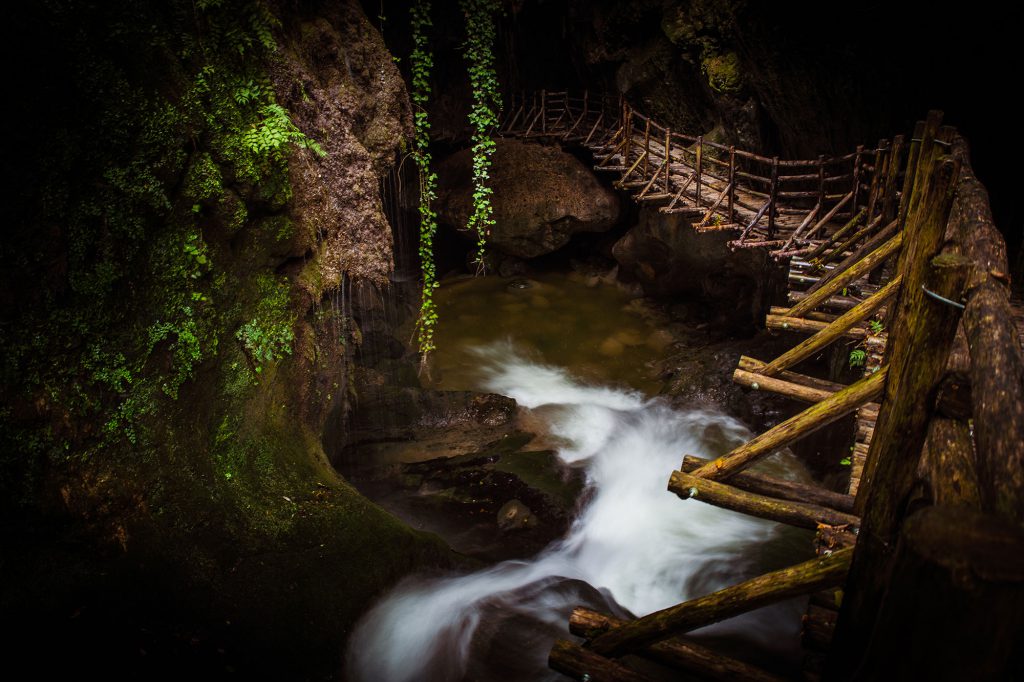 Ronzon, just after the Visitor Centre; through a pedestrian walkway that crosses the Caglieron stream, you go down a wide path, passing under the bridge of the Provincial road.
Along the route there are numerous descriptive panels and, on the right, there is a large cave (Grotta dei Breda), characterized by sloping columns that support the layers of sandstone forming the ceiling. A little further on, on the left, a wooden walkway leads to the cave used to aging the cave cheese (Grotta di San Lucio) of the Soligo dairy.
Retracing your steps, you will meet a belvedere in the shape of a bow, from which you can admire the splendid natural gorge and, continuing, follow it on suspended walkways.

Given the considerable limestone content of the waters, its sedimentation takes place with formations of wide concreted surfaces.
In the most illuminated areas the presence of travertine is remarkable, with alternating moss and other plant residues Inside the artificial cavities, there are some section of tunnels explored by speleologists.
Given the constant temperature in the deepest parts of the caves, and the progressive decrease in light, a series of micro-environments of considerable botanical and zoological interest can be observed.

At the end of the path in the gorge, the equipped path leads us to an ancient mill (restaurant) and, following the signs on the spot, after exiting the main gorge you will arrive at the Mulinetto, a historic structure built on two floors. Open to the public for photographic exhibitions, events but also for the simple visit which, going up to the 2nd floor, offers a pleasant view of the nearby waterfall.

Going up the path that passes above the restaurant mill, proceed up towards the end of the park. Along the trail, steep at first and then flat, we meet on the right two small renovated houses, destined to become Museo dello Scalpellino (The Stonemason Museum), in memory of the ancient craft.

The route ends by exiting directly on the Provincial Road 151, almost in front of a cave (Santa Barbara’s cave), previously used as a mushroom farm and now attending to be used as an educational laboratory in the future.
In reality those that can be visited here are only a part of the existing caves; other similar “caves” are spread throughout the high part of the territory, up to Masarè above Borgo Ciser. One of these, after passing the bridge over the provincial road, was dedicated from the inhabitants at the devotion of the Madonna.

The Caglieron Caves, appreciated both in summer for the coolness and in winter for the wonderful ice stalactites, are a reference point for environmental education workshops and a destination for thousands of visitors every year.

Since 2021 the caves of “Canton” and “Fai” are easy reachable thanks to the arrangement of the path. PLACE OF THE HEART FAI. Thanks to the collection of signatures organized by a special commitee in 2016, the Caglieron Caves obtained the 3rd place and they became “place of the FAI heart”.