The Cimbri who arrived in Cansiglio were not poor naive emigrants but small entrepreneurs who had already carried out their activity somewhere else and particularly in Carnia, where Domenico Azzalini had settled in 1786 in the fiscal forest in Pian Vidal and in Carnia. Besides Domenico Azzalini other “talzeri” operated, all of the Seven Municipalities: Antonio Strazzabosco with his brothers, who in the new contract of 1796 will be the “prime contractor” compared to his associate Domenico Azzalini, Domenico Zotti with his brothers, Modesto Tesari with his son and Domenico Bonato with his son Tomaso. 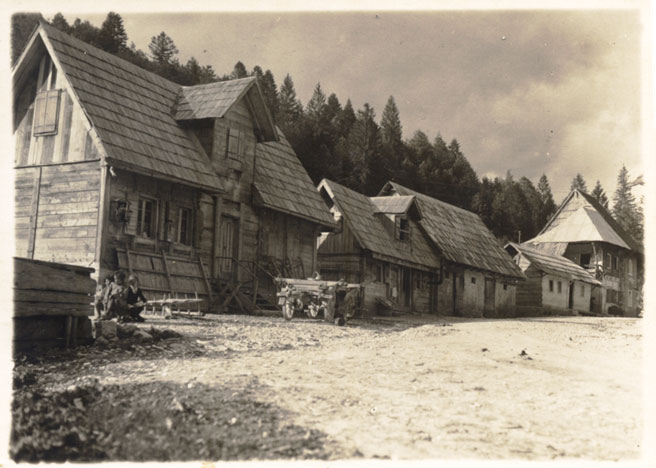 This is the map of the forest with indication of the boundary stones in which the boundary mark “CX” (Council of X) is carved in stones and are also indicated the casoni where the “talzi” makers live. 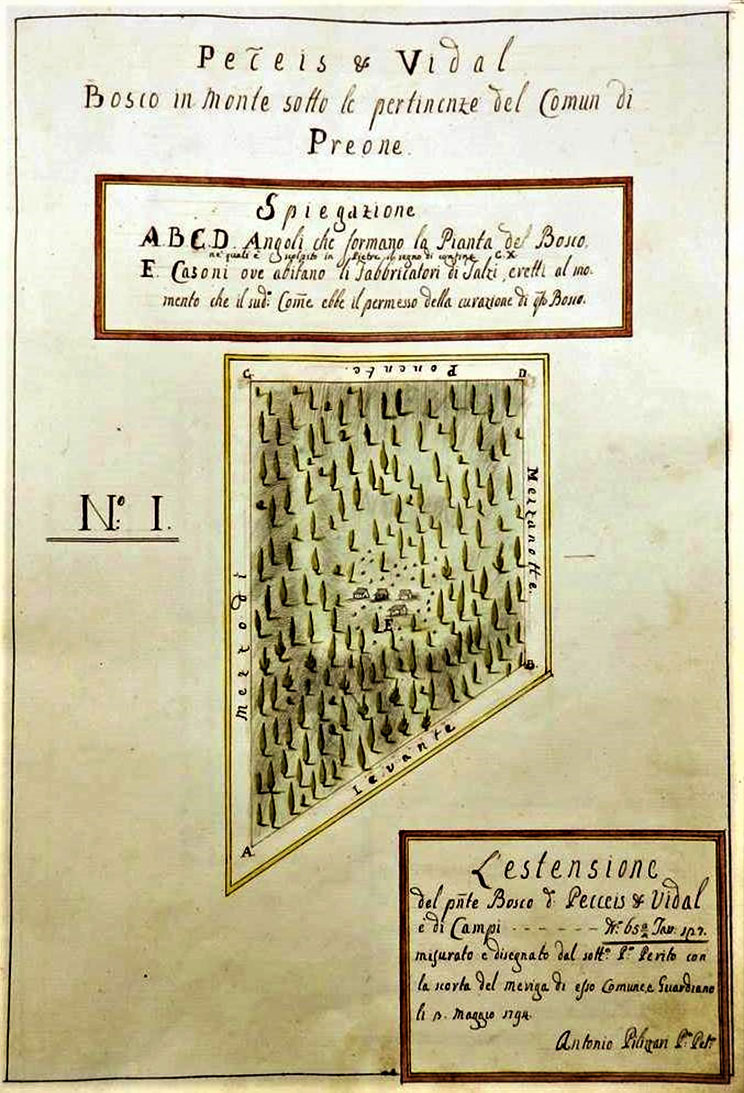 There are no documents about why Domenico Azzalini moved to Cansiglio, however it is the ideal place, better than Carnia: from a geographical point of view, it is more relative to possible markets, there is no competing “talzere”, the beeches abound and it is much closer to the Asiago plateau, place of origin of the family. But above all in 1797 the Republic fell, followed by a few months of “democracy” of the municipalities under the French control. At the beginning of 1798 it passed under the I.R. Austrian government which at first continued along the line of the Serenissima. At the end of the 18th century the beeches were too many and it was possible to make money by allowing private cuts (but always heavily regulated). 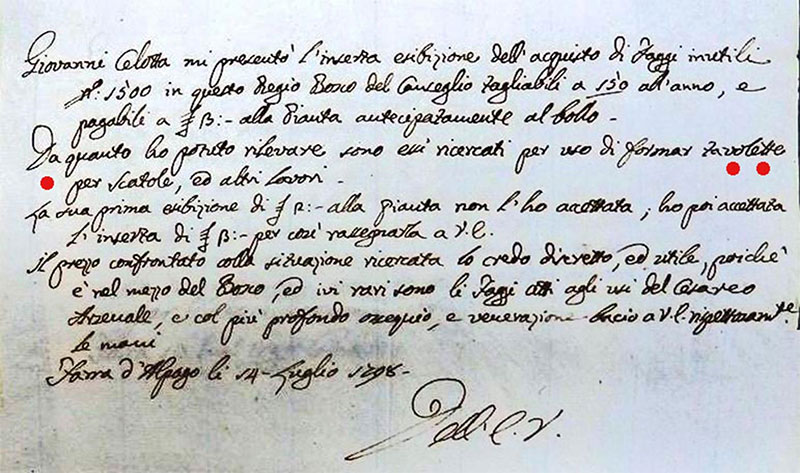 The first known document which refers to the “talzeri” in Cansiglio is the proposal of the contractor Celotta and the comments of the Inspector Valleggio in July 1798. This concerns the purchase of 1.500 beeches in ten years to make, as Valleggio says, “tablets for boxes and other works” that Celotta suggests “could be needed for the Arsenal itself” from where comes perhaps the note from De Berenger sixty years later. Celotta was a contractor who had worked for years in Cansiglio under the Serenissima and served as financial guarantor of the contract, given the length of time needed and the unsafe solvency of Domenico.

Celotta used to cut beeches for firewood, in fact he pays only 17 money per plant; the beeches he buys on behalf of Azzalini are of large size and pays almost four times for each plant (3 lire and 5 money each, that is 65 money).

The beeches required are in a logistically “difficult” area, a road will arrive in Vallorch only at the beginning of the 1900s, but is still today full of beautiful beeches. The road reaches the north of Vallon of Vallorch up to Cadolten and Val della Foglia. It is also required to build “huts for workers’ homes” and this clause is at source of the settlements, even if it is specified that it is not about any acquired right.

And this way we arrive at the final agreement. 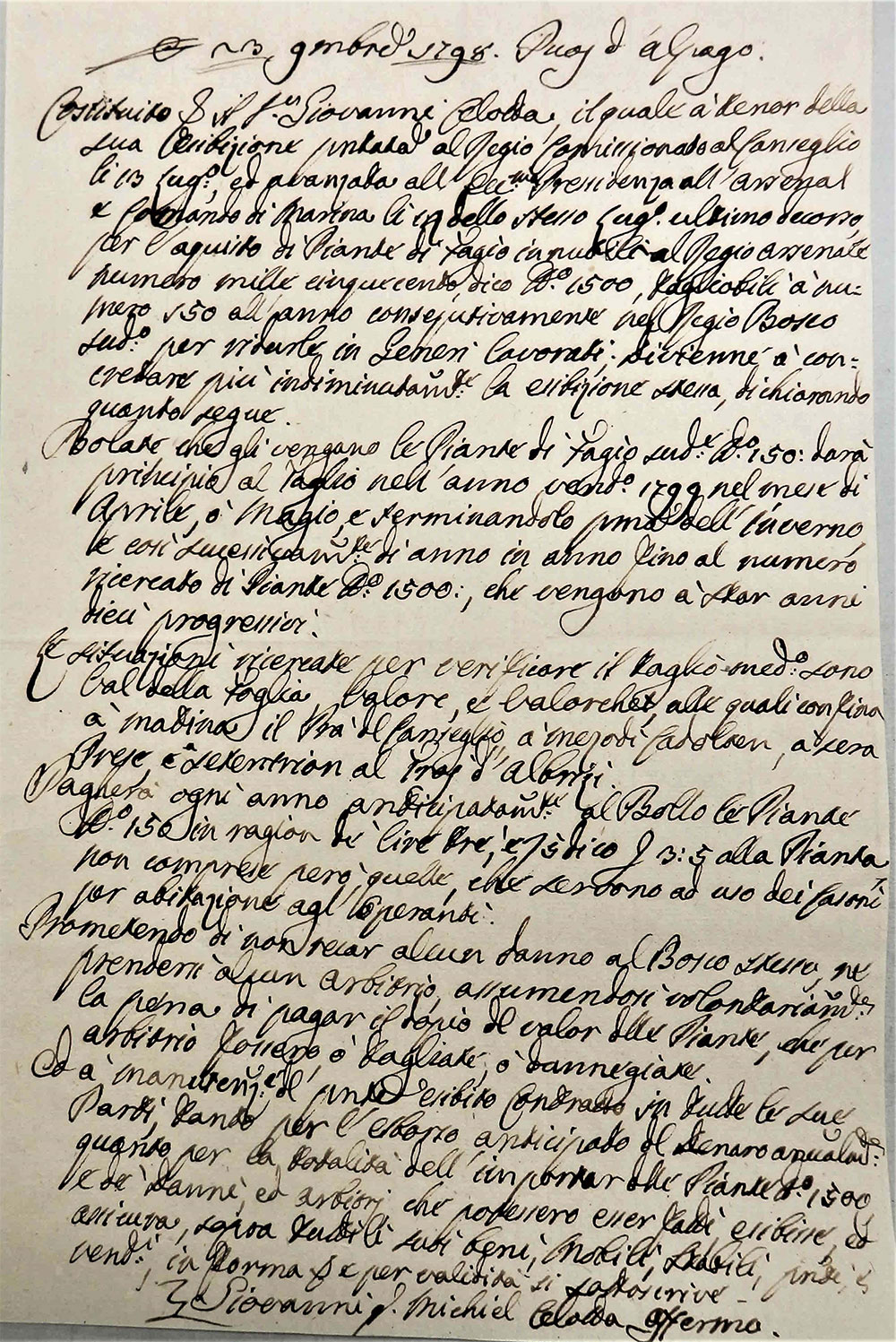 On the basis of this Domenico Azzalini in 1799, since November 1798 is not the right time to set up a house in Cansiglio, settles in Vallorch with his family.

This is a detail of the Cansiglio map of Baron General Anton Von Zach dating back to 1803, on which the limits of the requested concession have been reported; there are about 500 hectares and in the Vallorch area the words “I Scatoleri” appear, and this is the first settlement.

Domenico Azzalini, according to Di Bérenger’s reconstruction and to these documents, arrived in Cansiglio in 1798 with 4 of his 6 children: Pietro, Tommaso, Dionisio and Massimo, who will become a priest and Dionisio, who will return to Carnia. Business is going well, and in 1800, again through Celotta, an integration to the contract is requested and Cristiano Azzalini, Domenico’s nephew, comes in 1801 as Domenico’s workers and in 1802 Giacomo Slaviero arrives as Pietro’s worker.

Later Pietro succeeds his father in the administration, and he and his brother Don Massimo now manage the contracts directly. In 1816 arrived Tommaso Gandin and in 1822 Luigi Gandin as workers of Don Massimo and finally
in 1823 Cristiano Bonato with his sons Giovanni and Matteo as Pietro’s worker. They are all from Roana on the Asiago plateau and are the four families of Cimbri in Cansiglio.
In 1833 Giovanni Loser also arrived as a worker for Nicolò Slaviero, son of Giacomo, who later changed his job.
In 1836 Luigi Gandin di Tomaso, who however is not the previous Luigi, nor the son of the previous Tomaso, whose sons are called Eugenio, Beniamino and Giovanni. 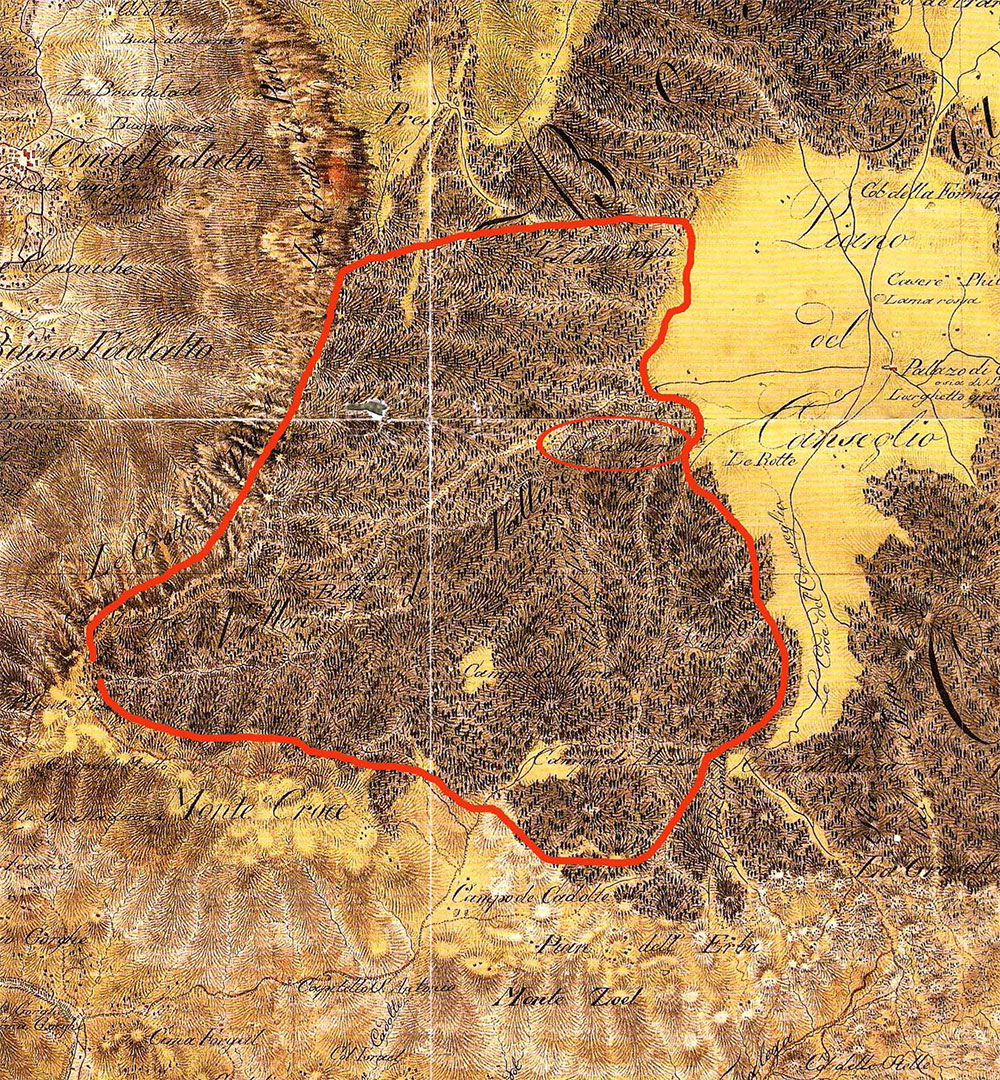 Settlements therefore grow and with the increase of concessions, if in the Von Zach map only Vallorch was marked, in the Magoni map of 1829 the Vallorch area is called “empty square made by “scatoleri” of the 1800”. Meanwhile, the settlement moved temporarily in 1828 to the Rotte area, but it must be taken into consideration that initially the settlements were not fixed.
In 1845 Di Berenger wrote about homes: “Every ten or fifteen years, namely, after they have consumed the plants suitable for their job and in range of their residence, they are transported to other points, as they have done several times since 1800, the time of their introduction.”

In 1829 there were three settlements: in addition to Vallorch there is that of Canaie of the widow of Slaviero, Mattia (Mattea, note that the widows inherited the concessions of their husbands).

The possibility to create a settlement was related to the concession, and at that time there were still three concessionaires, the Bonatos, in fact “inherited” the concession of Tomaso Azzalini. As a consequence of this “inheritance” the Pichs were born, evidently after 1829 and before 1833, the year in which the Bonatos hosted Giovanni Loser as a worker and the children “of a certain Bonato Luigi, who as a worker in the company…. (also unknown to the Inspectorate) came to take up residence there (in the woods) in the year 1814″ and had a son named Domenico.

The last settlement, basically simultaneously with the Pichs, is Valbona in 1832 by Girolamo Azzalini, son of Cristiano. Actually in 1841 Girolamo Azzalini chop in Valmenera, Col del Nas, Costa Canella .., Azzalini Pietro and Massimo chop in Costa d’Aver, Campo di mezzo and above Vallorch, GioBatta Azzalini under Pian dei Lovi, under Pian Sperlonghe, the Bonato in Val della Foglia and surroundings, Slaviero Mattia (Mattea) in Baldassaretta, under Canaie…, so near the respective villages.
In 1861, at the time of the census, the situation is as follows:

Note that the rent of the land is paid for the “casoni” but not for the vegetable gardens and the walkable area because “as a result of the rental act it can be used at any time by the Royal Administration without any compensation”.
Things will change with the opening of the current road from Fregona to Spert. The more distant villages, Valbona and Piana dei Lovi are abandoned, Le Rotte are reborn, Canaie moves to the current site, Pian Osteria and Campon develop, and many Cimbri begin to spend the winter season in Fregona or in Alpago.